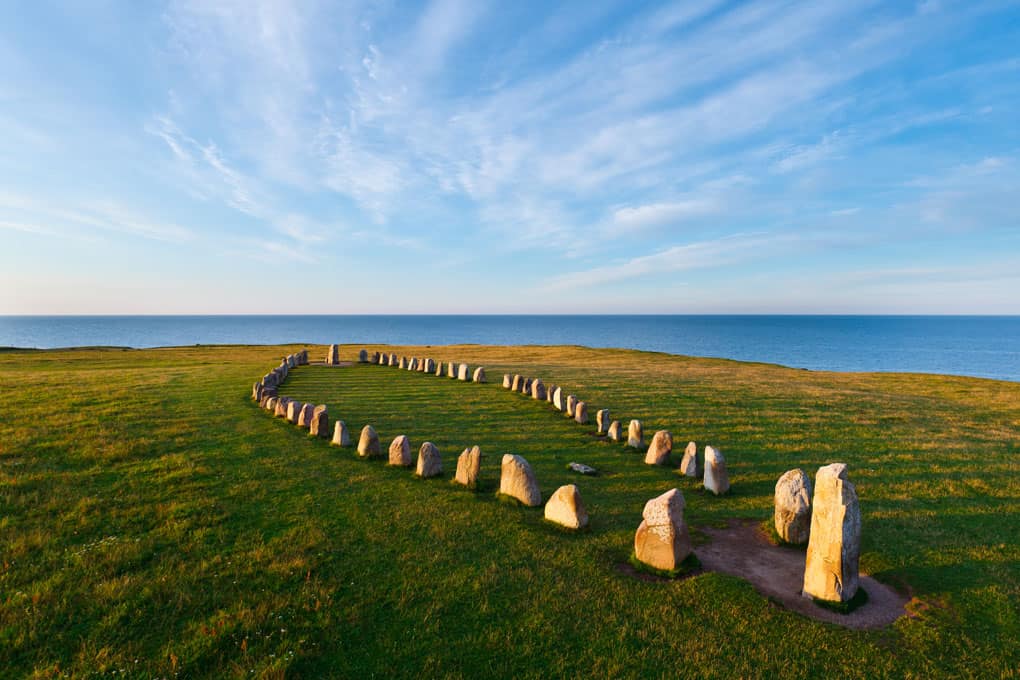 The other day a member of our hardworking staff turned to me and said “You really should write something about the name of the Press. People are curious. Why ‘stenen’?” She said this with a glint in her eye because she knew it would send me down the rabbit hole. As usual, she was right.

The short answer is that “stenen” translates literally as “the stone” in Swedish, a language that is close to my heart. Its sound world envelops me in plain-spokenness and a unique musicality of stressed syllables. I came to Swedish via German and I learned to relish its wildly divergent sound, which, for a beginner like myself, I had initially and mistakenly viewed as Germanic on the page. Runic inscriptions from early Skåne reveal the origins of Swedish’s linguistic economy, where the scribes of Runic Danish threw out the dipthongs for their shorter monophthong equivalents. Old East Norse, the predecessor to modern Swedish, eventually followed this trend. Words like our “sten” (nota bene: “-en” from sten-en is simply the definite article tacked onto the end) were the beneficiaries of this kind of linguistic haircut, transforming from the elongated ancient “stain/stæinn” to its more compact “stin/sténn”.

But “stenen” involves a more specific physical reference too, in the form of an enigmatic stone megalith on a plateau above the southern fishing village of Kåseberga, overlooking the Baltic Sea. Known colloquially as Ales Stenar (Ale’s Stones), the formation hovers at the edge of the cliff – both ship and sail – daring one to conjecture about its reasons for being there, even if its unnerving beauty makes guessing an extraneous pursuit. Composed of nearly five dozen massive stones (one weighs in at 1.8 tons), the oval-shaped site has baffled everyone from archeologist to astrologist. Rather than repeat the laundry list of conclusions, I would say simply that it is old, very old indeed; the kind of place that could be easily described in an epic tale like Beowolf, if only such a marvel had survived. Most of the stones are composed of red and gray granite and quartz crystal, and are drawn from the glacial deposits of the surroundings. In an astonishing show of human hand, the two quartzite stones that anchor either end show signs of quarrying from an area 30 kilometers away.

Not surprisingly, Ales Stenar has captivated a variety of true believers. There are those invested in its potential as an ancient astronomical clock (the stones are positioned so that the sun goes down at the northwestern corner in summer and rises at the opposite corner in winter), as a magnificent space for various kinds of ritual, with its view of the ocean and the horizons in all directions, and finally, as a site for burial rites. How could a gods-fearing, sea-faring people do otherwise? I am tempted to believe it all, particularly in the power of Ales Stenar to locate us and to enact of a form of deliverance. You need only to approach the site on a warm May day, through the wide green plains dotted with vibrant yellow fields of rapeseed to its breathtaking perch at the end of the earth, to understand its sway in the contemporary Swedish imagination. If I could claim a Swedish self, part of her lives at Ales Stenar: a fellow paraglider off the coastal cliff flying above its imposing row of stone teeth, forcefully pointing toward an unknown future.

So the name Stenen recalls both sound and namesake. For the Stenen Press community, like many things transplanted in language and place, the name has become more loosely symbolic. The anglicized pronunciation of stenen (I am, by my own admission, the main perpetrator) has lost its singsong quality, flattening out squarely into two short vowels. Because it doesn’t carry immediate meaning in English, we might assume it is simply someone’s name. It is straightforward to spell. Its letters have a pleasant visual symmetry. But it is a bit mysterious too. I like it that way. Consider it a blank slate, on which lithographers of every language will render their sounds, mark time, and offer their own cosmologies of place.